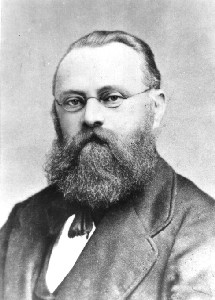 Biography of the Astronomer

The Development from a Farmer’s son to a Lithographer and Astronomer
Wilhelm Tempel was born on December 4, 1821 in Niedercunnersdorf in the East Saxony region of Germany. After a period of seven years - his school days - and another two years of work at his parents’ farm he left the weavers’ village to become a lithographer in Meissen. From 1840 onward, his travels lead him to different German cities, as well as Copenhagen and Christiania (today: Oslo). Around the year 1850 he moved to Italy where he set up business as a self-employed lithographer in Venice. He was famous for his exact and excellent drawings and his art was proclaimed by both botanists and natural scientists.
In 1858 Tempel married Marianna Gambini, whose father worked as a doorman in the Dogen Palace at the Markus Place. The marriage was childless but everlasting.. In the same year he was married he made another life determining decision recalling his school days in Niedercunnersdorf when he had first become interested in astronomy. He bought a 4 inch refractor telescope (Steinheil, Muenchen). He wanted to add to the astronomical literature some observations of his own.. In the following year he succeeded in making two important discoveries. In April 1859 he found the only comet discovered that year and in October he discovered the Merope Nebula in the open star cluster of the Pleiades (the Seven Sisters). This was the first observation of the type of phenomenon known today as a reflection nebula in which the Pleides stars are embeded.. This discovery was disputed for a long time because many astronomers with even bigger telescopes could not see this nebula. The well-known astronomer Giovanni Virginio Schiaparelli (1835-1910) from Milan, Italy wrote about this later: "So many telescopes were pointed at this part of the sky since Galilei! But Tempel, supported by the quality of his instrument and his extraordinary ability of observing, found things that had not been discovered by telescopes of all kinds for the previous of 250 years."

Productive Time in Marseille: Discovery of Several Minor Planets and Comets
In the year 1860 Tempel, who was self-taught, but already well-known by experts from his two discoveries, was called to the Imperial Observatory in Marseille by its Director Jean Elis Benjamin Valz (1787-1867). He worked there as an astronomer until Valz’s retirement at the end of 1861. Once again he became a self-employed lithographer in Marseille, but his interest in astronomy continued. Schiaparelli assessed later: "The stay in Marseille was the calmest and most productive period in Tempel's life." There he discovered different minor planets orbiting around the sun in the region between Mars and Jupiter, the Main Asteroid Belt.:
(64) Angelina                   (81) Terpsichore              (97) Clotho
(65) Cybele                     (74) Galathea
Now he belonged to the group of astronomers, who discovered the first 100 small planets: R.Luther with 16 discoveries, Goldschmidt with 14, Hind with 10, de Gasparis with nine, Charcornac, Pogson, and C.H.F. Peters with six and Tempel with five discoveries.
The field of work that kept Wilhelm Tempel the most interested in Marseille was the study of comets. Again and again he observed the suddenly appearing and soon vanishing vagabonds of space. He recorded their orbit and changes in appearance through drawings. Also he was extraordinarily successful in the finding of new comets. He found 13  new comets and eight short period comets. Tempel is credited as the discoverer of 21 comets in all. To gage his success: In the year 1880 only eleven short-period comets were known (which were observed a minimum of two times on their orbit around the sun): d'Arrest, Biela, Brorsen, Encke, Faye, Halley, Tempel1, Tempel2, Tempel3- Swift, Tuttle and Winnecke. There was nobody else who discovered more than one out of this list. Only Tempel: He found three!
9P/Tempel 1, is observed intensively and will be the destination of the NASA probe Deep  Impact in 2005
10P/Tempel 2, is also observed frequently.
11P/Tempel-Swift-LINEAR, missing from 1908 until 2001
55P/Tempel-Tuttle, the parent body of the Leonid meteor shower.

Astronomer in Milan and Director in Arcetri
During the German-French war Tempel, along with other Germans, was expelled from Marseille, in 1871 by the temporary government of France. He returned to Italy. At this point in time he was among the most successful astronomical observers of the 19th century and was gladly hired as an astronomer in Milan by the already mentioned director of the Brera-Observatory, G.V. Schiaparelli. At the Observatory Tempel's main focus was on comets, nebulas and meteorological phenomena.
At the beginning of the year 1875, the leadership of the then newly built Observatory Arcetri was transferred to him. The Observatory is located south of Florence in the suburb of Arcetri (today a borough of Florence) The main instrument of the observatory was a refractor telescope built by Giovan Battista Amici (1786-1859) -had a 283 mm aperture and 5370 mm focal length, then, the biggest telescope in Italy. Because it was excellent for observing faint celestial bodies Tempel focussed his investigations on diffuse nebulae. Because good nebula photography was still not possible (photo plates were still too insensitive) drawings were made. Tempel's trained eye, his drawing talent and experiences as a lithographer led him to develop valuable observing protocols, his analysis lead to his most important scientific publication: "About Nebulas" and was published in Prague in 1885. Thirty pages of text and two tables show a part of the experiences of the tireless astronomer.
Ernst Wilhelm Leberecht Tempel died on March 16, 1889 in Arcetri. Schiaparelli, who wrote about Tempel after his death, said: "Although Tempel was not formally trained he wasn't without knowledge. He had an appreciation for beauty in nature and art. He calculated his own orbits after training himself n elementary math, logarithmic tables, trigonomical formulas and their use. Completely unselfish and with his enthusiasm for astronomy we can thank him for several significant discoveries and his name has received a place of honour in the history of astronomy."